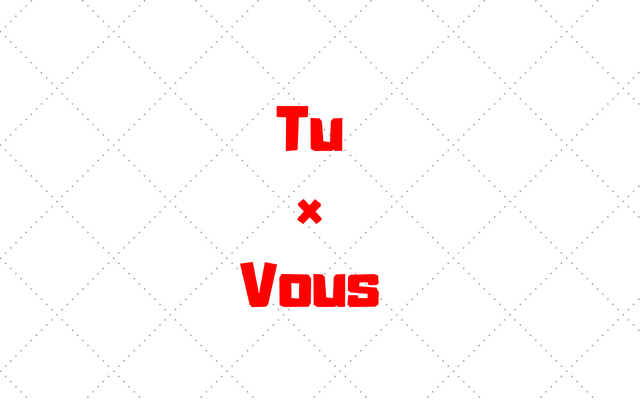 In French, you have two ways to say ‘you’: ‘tu’ and ‘vous’. It is important to know in which situation you use them as they have very specific use and they set the tone of a conversation. They also define the relationship between the people involved in the conversation. Once you work out which one you need to use, don’t forget to check your grammar.

For example, when you conjugate verbs, the ending will not be the same if you are conjugating the verb with ‘tu’ or with ‘vous’. Note that ‘tu’ and ‘vous’ also influence the use of possessive adjectives in a sentence.

‘Tu’ is a singular subject pronoun and is used in informal situations. You can use ‘tu’ if you are addressing one person in an informal context.

Examples of situations when ‘tu’ is appropriate to use

An adult talking to a child

You grew up a lot since I last saw you.

Friends talking among themselves

Do you want a coffee?

Did you call your brother?

Do you have a new haircut?

Do you need help?

A stranger or somebody you just met

You have a beautiful house.

Vous avez reçu mon CV ?
Did you receive my CV ?

At work, when talking to somebody higher up than you

You will get my report on your desk at midday.

You have a lot of ambition.

‘Vous’ can be used anytime, both in formal and informal situations, when talking to a group of people

Are you coming to my birthday party tonight?